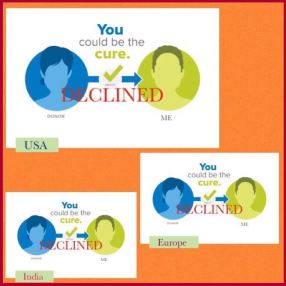 Note: Story contributed by Ekata, dedicated to anyone looking for a bone marrow match or has found a match who has declined, and their families.

I was diagnosed with chronic lymphocytic leukemia (CLL) in May 2011. A disease usually known to be slow growing compared to its relatives, so if you were going to have any form of leukemia one would probably opt for this one. Unfortunately for me, in the first 6 months we came to realize that my CLL was much more aggressive than expected.

As the disease progressed, we tried to stay ahead of it. Monitoring, medicating, adjusting my lifestyle, trying all types of alternative treatment options, but my health continued to deteriorate. It became increasingly more likely that chemo on its own, even if it worked, wouldn’t be sufficient for my situation. I was going to need a bone marrow transplant, as many leukemia or lymphoma patients do, to give me a chance of surviving. A bone marrow transplant like any transplant requires finding a match. However unlike most other transplants, the donor’s body will replenish what they donate with time.

The first step is to test family members since that is your best chance of finding a match, especially siblings. My brother had registered to be a bone marrow donor prior to me being diagnosed so we had his HLA typing. Unfortunately, he wasn’t a match for me.

As my health worsened, counts dropping and the cancer starting to spread quickly, my doctor submitted an open request in the National Registry for me. Month after month, we silently waited for an update, hoping for a call that they had found a potential match. Someone willing to be my bone marrow donor, someone willing to be my cure.

In Dec 2012, we did get a phone call. We found ourselves in a situation we wouldn’t wish on anyone…

A match in the US national registry. A donor who had recently registered since the doctors at that time were checking the registry monthly for a match for me. Unfortunately, although they had registered to be a donor, when they were told they were a potential match for a patient, they declined to move forward. Ouch!

My family and I were aware this could happen and we knew the odds of this happening were even higher within the South Asian community, but this knowledge didn’t fully prepare us for the heartbreak we went through.

Imagine…as a dad, the protector of the family, knowing someone out there can help your child, he/she is aware of it but chooses not to. Imagine…as a mom, who would give anything to take away the pain of her child, including switching places with them, being left knowing someone could help your child but decides not to. Imagine… as a brother, very close to his sibling, raised as brother and sister but also best friends, counting on the generosity of a stranger to make sure he still has a sister in 5 years, only to be told, we’ve found a match but the person has declined to be her donor.

Each of us has our own scars from this heartbreak. Our scars aren’t visible but they are there. You may feel it in a hug, in the tone of something we say or catch a glimpse of it hidden in a smile. We tried our best to not let this heartbreak dampen our hope or crush our spirit. Instead using it to help understand the issues out there and try to be a voice for a cause that could use more voices. Turning our hurt and disappointment into something positive, hoping to help even one patient and their family have a fighting chance.

Since that Dec, our family and friends have rallied behind us, trying our best to raise awareness around South Asians being under represented in the registry and the importance of being a committed donor. We have tried to spread the word and register as many committed South Asians and other donors as possible, so another family hopefully wouldn’t go through what we did.

It’s been 4 years since we started this journey and a lot has happened. We started this blog, Make Me Stronger, where we share our stories and others. We’ve met other families and people affected by leukemia or lymphoma. Family, friends and strangers have joined us on this journey. Becoming actively involved in holding bone marrow drives and/or volunteering at  them. Hoping to educate our community and provide an opportunity for people to register.

Like most things in life, once we got involved, we started to see the why behind the issues our community was facing. As we started running more bone marrrow drives and talking to people in our community, we began to better understanding some of these issues. We realized some people were registering out of peer pressure, not fully understanding the process. Others were registering to see if they were a match for someone they knew but weren’t open to being a donor for someone they didn’t know. We also realized many people were simply scared. Scared it would hurt too much or worried it would affect their health. Scared of the unknown or scared of some horror story they heard that was clearly false. When we started grasping some of the issues, we realized we were in a unique position to address them with understanding and kindness.Using our platform and our drives as an opportunity to educate our community by having open and non-judgmental conversations about people’s concerns.

Over the past 4 years, thanks to our friends and dedicated volunteers, together we’ve registered over 1,600 new bone marrow donors in the US. We’ve partnered with Be the Match, SAMAR and DKMS to reach our community and other minorities. We’ve also built a relationship with MDRI, a registry in India, and support them in raising awareness and building a registry in India.

Since that fateful Dec phone call 4 years ago, we found 2 more matches. One in Europe and one in India. Unfortunately for us, neither of these matches agreed to move forward as donors. Both of these matches were given a picture and told a little bit about me, but it didn’t sway them.

These were passing thoughts, lasting only seconds, but thoughts nonetheless. I knew that even though it felt like it was about me, it actually had nothing to do with me or who I was or wasn’t.

What happened to us had happened to many other families and still is. Several families in our community lucky enough to find a match in the registry, were met with similar disappointment and heartbreak – leaving them with their own scars.

For my family and me, the odds of South Asians declining to move forward outweighed the odds that we had found a match. Not once, not twice, but THREE times.

Unfortunately, this isn’t just our story…

An Indian doctor in California had multiple matches, all of whom decided not to proceed. She’s since passed away.

The parents of a 12 year old boy in India were looking for a match for their son. They had found two potential matches but neither agreed to move forward. His parents have outlived their only child.

There are countless heartbreaking stories like these, and unlike my family, many of these families’ loved ones are no longer with them.

Our communities are clearly facing two very real and serious, yet separate issues – 1) South Asians and minorities being under represented in the bone marrow registry despite making up a large percentage of the overall population, and 2) South Asian donors registering being committed to being a donor if they are a potential match.

How?  Easy… Education, Understanding and Registering.

Educate yourself, your families and our social network on the importance of joining the registry and the need for more South Asian and minority donors.

Understand the bone marrow donation process and dispel the myths you may have heard.

Register to be a committed bone marrow donor with your local registry.

My time for a match potentially saving my life has passed. It’s no longer an option for me, even if I found a committed donor now or one of my previous matches changed their minds. But at least we are blessed because my family still has me.

There are many people affected by leukemia or lymphoma, like the doctor in California, the young boy in India and the new father in Singapore, that are no longer with us. For them and their families, it’s also too late.

However, there are thousands of patients out there waiting and able to undergo the bone marrow transplant they need. Waiting for that phone call that a potential match has been found and is willing to move forward. You could be the reason they get that phone call.

For more information about being a bone marrow donor and frequently asked questions, please visit Be the Match.

If you want to register to be a committed bone marrow donor and are in the US, you can begin the online registration process and a kit will be sent to your home for your convenience.